get stuck in (marilyn)

get stuck in (marilyn)

Wade was sat on the window ledge of the Astronomy Tower, mindlessly chucking firecrackers onto a flat roof below. They made enough of an explosion and noise to keep him amused, but soon he'd grown bored of it. He was avoiding the common room on purpose that evening, feeling grumpy enough that he'd punch someone if they got too close to him. Also, he didn't really feel like being around Siobhan either. She'd probably moan at him for being grumpy, then keep demanding his attention. Having a girlfriend was a bit much sometimes... 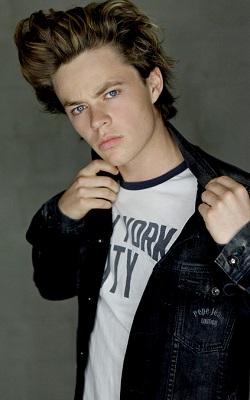 Marilyn was heading back to the common room after spending some time with her sister in Moaning Myrtle's bathroom; that meeting was cut short and briefly relocated after minutes of Myrtle moaning about how Harry nor his sons have looked her way like that. Why was that ghost allowed to annoy people?!

Instead of going back to Gryffindor Tower, however, Marilyn ended up taking a different direction towards the Astronomy Tower. If she could avoid her crazy dormmates as long as possible, she'd be okay! It was hard focusing on building her journalism background with her sister being pregnant and pyro bitch being all over her-

What was he doing up here? He started chucking bits of stone out the window now, until he heard footsteps. He didn't bother turning around, but he recognised Marilyn's annoying voice. At least she wasn't calling him Wadeykins.

"Whadda ya want?" he muttered grumpily.

Here she was all alone with Wade in the Astronomy Tower, and she had no idea what to say or do! How pathetic! He was in a worse mood than usual; Marilyn needed to do something about it!

"Um, are you okay?" she squeaked softly scratching her arm out of nervousness.

Then he sighed loudly.

Someone else was coming up the stairs. From the sound of his voice, as he spoke on his crystal, it was Professor Riddle. Wade suddenly leapt down from the windowsill, whipped his head about, and spotted a pile of empty boxes in the corner. He dove behind them.

"Dumb arse, get over here!" he whispered urgently to her.

Wade didn't seem that happy, but she had no idea how she could possibly console him. Before she could try to pry deeper, she was forced to hide. She covered her face as she ran to join Wade behind the boxes?

"What's going on?" she whispered trying to hunch down as far as she could.

He flattened himself some more until he was right up next to her, breathing slowly - and quietly.

"I'm locking the Astronomy Tower for the night," Riddle was saying, supposedly to someone else on the other end of his crystal. "The children keep getting up here after hours..." Then he started to talk about some really boring, work-related stuff that Wade wasn't interested in. He saw, from his position, a pair of feet. Riddle appeared to be checking there was no one else in there, but he wasn't particularly thorough with his search.

Then his voice retreated again, there was a sound of several locks slotting into place, then his feet going back down the stairs. Wade turned to look at Marilyn, frowning. "Whatta prick..."

Professor Riddle?! Marilyn couldn't get in trouble with him! Her mum wouldn't let her hear the end of it! She had her hands wrapped around the top of her head until she knew for sure that Professor Riddle had vacated the tower.

Her eyes slightly red, she looked towards Wade as her brain made sense of the situation they were in. They got locked into the Astronomy Tower...

"We're trapped! My mum will be so upset if she learns that I got locked into a tower all night! What are we going to do?!"

Time to be the damsel-in-distress.