Running Up That Hill :: Wizarding Britain :: Hogsmeade :: Cafe and Pubs :: The Three Broomsticks

Ellie had sent an crystal text to Maverick talking about how they should go and meet at The Three Broomsticks to get lunch together and spend the day in Hogsmeade since she enjoyed hanging out with him. She had dressed super nice with hopes of maybe him noticing her.

She took a seat and waited for him to come, hoping he didn’t flake. She also knew Charlotte would be having a fit. Maverick had gotten the message from Ellie earlier that day about heading into Hogsmeade for lunch and to hang out. It had been a bit surprising since he was usually the one asking girls out but he didn't mind it. He liked hanging out with Ellie. So, he had sent her a message back that he would meet her at the Three Broomsticks before going about his morning workout and everything like he always did. He didn't usually miss his morning workouts in the gym since they had put it in and today was no different.

When lunchtime came, he had finished his workout and showered before heading down to Hogsmeade. He dressed casually, as usual, just jeans and a t-shirt with a jacket over it as was pretty normal for him when it was chilly outside like it was today. He walked into the little pub and saw Ellie was already there. He walked over to the table where she sat and gave her a half-smile as he took a seat across from her. "Looks like I'm late to the party. I hope you didn't think I was going to leave you hanging." He teased her. 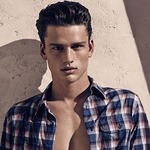 Running Up That Hill :: Wizarding Britain :: Hogsmeade :: Cafe and Pubs :: The Three Broomsticks