Dagger is my player who became that way due to his father. When he was just a young lad his mother and sister were killed tragically which meant that his father raised him and his little brother Keelin. It broke him since his mother always had that way of getting through to him when he got angry but sometimes he digs himself in too deep at times. Dagger learned to not treat woman with respect and treat them as toys. For him it has been difficult to unwind his mind for the brainwashing his father had done to him as a young boy.

Thank you so much AJ from Shadowplay for the set!! 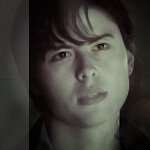