Growing up was not that tough, she knew she was different and embraced it all. Nothing scared her nor did she fear she was going to hell. Samara knew that no matter where she went she was going to be the damn Queen of it. When she was a teenager she killed her entire family but her twin sister Lilith because lets face it, the world having two Goddesses in this world they would feel lucky. Samara is a wanted criminal but honestly she laughs in the face of that wanted bounty. She serves as a Death Eater and cares about pretty much no one unless someone gains the trust of her. Once that trust is there, do not break it. 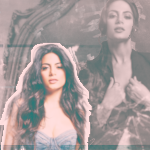