Hades is my sexy criminal, he was locked in Azkaban for two years for not only beating a man to death but also killing his family as well and he may have also sold the man's daughter as a prostitute, Hades pleaded innocent and swore he didn't do it and also had his partner in crime plant evidence on the girlfriend of the man he had beaten to death, she had wronged him in a way and that is something not forgivable at all to him, he vowed to make her pay. So after two years and fake evidence planted, his life sentence was placed on the girl and he is now walking free. Being out he is experiencing a lot of new things but he is not changing who he is either.

Family ~ Lestrange Family
Enemies ~ A lot but open for more
Lovers ~ He has a lot of lovers and is open to them, he is no prude. @Skylar Ashton - one night stand, @Kyler Cartwright - Future baby mom, lover, and endgame

Thank you so much Nimue from Shadowplay for the set!! 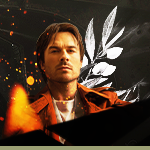